As If We Never Said Goodbye: IM Victoria 70.3

The atmosphere as thrilling here as always
Feel the early morning madness
Feel the magic in the making
Why, everything’s as if we never said goodbye
-Sunset Boulevard

After a tense build-up to IM Victoria 70.3, I was just happy to be at the starting line. Three weeks earlier, I was feeling really good about the progress I had made. My swimming and running were seeing improvement, and I hoped that my biking would be there for me when I needed it. Then, on a routine Tuesday tempo run, I had a little sensation in my right calf. “No biggie,” I thought. However, the moment I finished my run, the sensation became a searing pain that even made it hard to walk. Immediately, I was terrified that I had yet another DNS on the horizon.

It was a strained calf. Not terrible, so I threw everything I knew to throw at it. I went to chiro/Active Release Therapy, I had a massage, I slept in a Plantar Fasciitis sock, I iced it, Compex’ed it, Kinesio-taped it. Oh, and I rested it. I pretty much had to take a week off of training—the most important week leading into a race.

So one week out, I still hadn’t done 56 miles on my bike, and I needed to do that in order to know I could. Beggars can’t be choosers, so I headed out in the heat of the day … 92 degrees. I had forgotten how awful that is … hot wind, hot water bottles, sunburn and a complete nutritional crash. I made it the 56 miles, but it was ugly. However, being the theatre nerd I am, I know that sometimes a bad dress rehearsal precedes a great opening night.

My calf was feeling pretty good the week of the race, so I decided to attempt my first endurance triathlon since IM Lake Tahoe, September 2013. Kevin helped me get all my gear in order and we headed out early Friday morning before a Sunday race. The Anacortes to Victoria ferry only runs once a day so there were plenty of other early bird triathletes onboard.

I had forgotten how much prep work there is for a half Ironman event. I probably spent just as much time prepping as I did racing. Between packing, packet pickup, shake out workouts, bike check up, repacking, and all the other things on my checklist, its a wonder that any of us even have energy for racing! Especially now that they start at an inhumane 6 am. Since when?!? That means that breakfast had to be eaten by 4 am and we had to be out the door by 4:15.

3:30 am breakfast made by Chef Kevin

I did a great job of staying focused in transition and getting everything set up, and getting out of there. I got in my full planned run and swim warmup which rarely happens. They announced that the swim would be marginally shortened due to weeds in the lake. 1500 yards was the new proposed swim distance—a few 100 yards shy of a mile.

The start of the swim was pretty smooth for a triathlon swim. I quickly got into a rhythm. I was happy to be racing again! But it wasn’t very long until I ran into a backstroker, and lost my mojo. I remained calm, and picked up where I left off. I was passing swimmers and feeling pretty good until we made the turn back to the finish. I really wanted to swim in calmer waters and I found them—off course. I ended up swimming a little over distance as a result. The final approach to the dock was pretty chaotic, but I waited my turn and had a big smile on my face as I jogged my way over to transition. I had finished the swim. I was was racing again!! Goal achieved.

swimmers, on your mark … 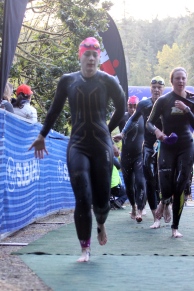 I took longer in transition, as I expected. I was kicking off some serious rust. But in less than 5 minutes, I was out on the bike course. It was a bit cold to start, and my problem back wheel continued to give me grief—rubbing on the break after numerous checks and double-checks by mechanics. But that was no longer in my control, outside of using the couple of tricks that sometimes help. I tried to focus on the road. It was a very technical course, with lots and lots of turns. I took them like any good bike racer would, and I think that saved me some time. I had forgot that the majority of the bike field I’d see were male, which can be frustrating. They have a tendency to pass you and then take a snack break, meaning that they are not maintaining their passing speed and force you to fall back. It’s annoying. But I am principled and refuse to get a drafting penalty, so I fall back. I did a great job with eating, a great job with drinking in the first half of the ride, and not-so-great in the second half. As far as memorable parts on course, there is a meaty out-and-back with a nice steady climb, and a screaming fast descent the other direction. Some may know that I have had a mental block on fast descents for a few years now. But the long climb next to it gave me the time to look at it, make peace with it, and get ready to rock it! I didn’t hit my breaks once. I stayed aero and hit 44.8 mph. That is huge for me! I was pumped! After all the rolling hills (and questionable bike fitness) I was ready to get off my bike and run! It was the most conservative I’ve ever raced a HIM on the bike, but I was still feeling good about it. 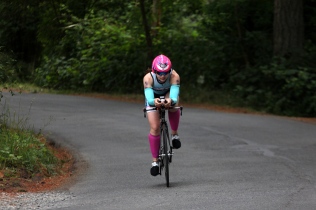 Hi Kevin!! Thanks for being awesome!

The run is a trail run that starts with a steep kicker right out of transition. I was happy to have my trail shoes and I started off really easy. The technical sections were fun as most of my long run training has been out on various trails near Seattle. Things were really smooth until I could feel a blister come on at mile 5. That blister would become so big, it looked like I was trying to grow a second big toe. My pace slowed a bit, but I kept thinking I needed to keep my cadence high and not fall into the Ironman shuffle pace that was setting into those around me. I hadn’t focused on the race aspect of the day every much at all until the end. Less than 1/2 mile to go, a woman in my age group was running in front of me and was well within my reach. I tried to pick it up, pass her, and finish strong. Done, done, and done!  I crossed the finish line in 5:18 with my arms in the air! I was back to endurance triathlon racing!!

getting into a rhythm 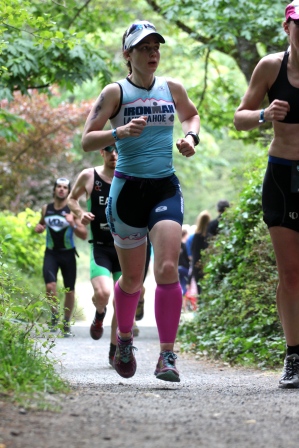 Ready for a medal and some food! 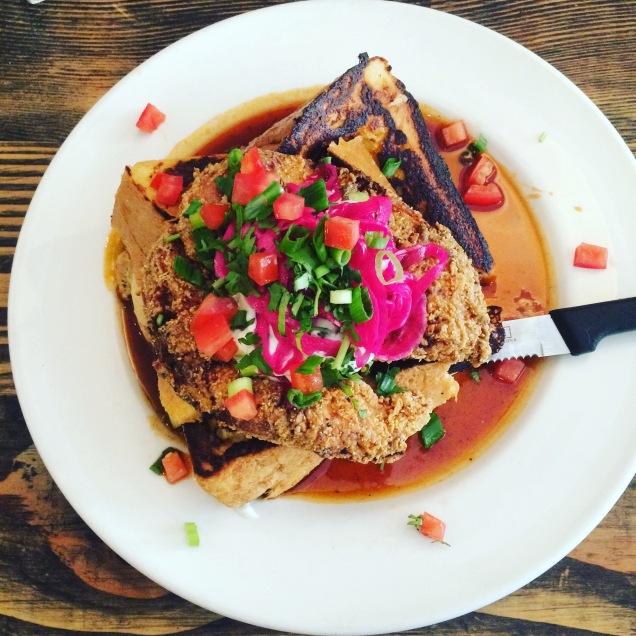 It was so nice to be part of the community and see friendly faces that I haven’t seen in awhile. The cheers from fellow racers or spectators felt really good. The camaraderie may be my favorite part of the whole thing. Nothing like big sweaty hugs, sharing of war stories, and celebrating the big wins (Go Sarah!) and the little ones.

As always, it takes a lot of preparation, a little luck, and a ton of support to get to the start line of a race and be successful at the finish line. Here is a short list of people I’d like to thank for their help!

Kevin: Obviously. He is my better half and was an amazing sherpa. He got up at 3 am to make me breakfast. He remembered the bike pump when I forgot. He took awesome race photography.

Coach Tom: Thanks for being patient with my schedule and planning smart workouts. And always believing in what I can do.

Mike and Saul at Blue Seventy: I had ordered the wrong goggles and they helped me get what I needed to race. They worked great and I was so thankful!

Bruk at Real Rehab: Thanks for your advice regarding my calf.

Dr. Kevin Rindahl and staff at InHealth: Thanks for helping keep my body in one piece!

Alexa: Thanks for being the best massage therapist an injury prove athlete could hope for!

The ladies at Studio Evolve Pilates—Nicole, Annie, but mostly Caitlin: Thanks for teaching me to use my core that has opened up new ways of moving for me.

Carson: Thanks for helping me with my cleats, and pedals, and power tap wheels. You have always been so generous with your time and knowledge!

Alicia: Even though you don’t tri anymore, your cheers and well wishes always make me happy.

Kevin’s parents: Thanks for always taking care of our little Wrigley when needed. He loves you both so much and we know we never have to worry about him.

All in all, I’m feeling energized and ready to put in the work headed into Ironman in October! I accomplished my two larger goals of finishing and finishing under 5:30. But cooler still? I was able to walk normal the next day. There is more in the tank, I can feel it!

Thanks for taking the time to read and share in my journey. Cheers!