Somehow, my coach convinced me that racing Wildflower this past May would be fun. That it would be a fun adventure for several of us Cycle U athletes to do. That it was a spectacular course and atmosphere. That he was planning on coming down and camping for it.

Well, misery loves company, so I decided to sign up. By race day, everyone else had bailed except for my faithful training partner Clayton and me. I would write an expletive here, but my impressionable second cousins may read this and that thought helps me keep my writing a bit cleaner.

Now that I feel I can be honest about the subject, I was miserable in my last job. We had so much turnover and transition, I was having a mini panic attack every morning before work. I mean, I was even called by HR for an investigation regarding harassment in the workplace. That is how bad it was. Why do I mention this in a post about Wildflower? Well, I’m not using it as an excuse, more of a frame of reference. My training was at best, sub-par during this time. I was trying to keep it together at work and interview for new jobs at the same time. I was in the final stages with two different opportunities when race day rolled around. Now, everyone knows how time consuming job hunting can be. It became my number one priority and training took a backseat. Probably a bad idea before attempting the hardest Half Ironman ever created, but that builds character, right?

Because Wildflower is located in the Central Coast region of California (also known as the middle of nowhere), Kevin and I flew into San Jose and drove 2-2.5 hours to Paso Robles, the closest town to race. We stayed at a motel as that is as close to camping as I go. (In hindsight, the camping actually looked really fun, just not very conducive to racing well.) It was one of the prettiest drives I’ve experienced in a long time. We drove past farmlands and rolling hills with grazing cows … in the sunshine! The bike course was much of the same. It was the prettiest bike course I’ve ever seen, and I feel like I’ve done some really picturesque races.

Leading up to the big day, Clayton and I got a few good swim/bike/run workouts and Kevin did a good job catching them on film.

Usually, I’m really excited for race day. I take that as a sign that I’m as ready as I can be. I went into this race with mixed emotions. I was excited to see if I could PR the swim with what I learned at Tuscon training camp and I was excited to trample what they call ‘Nasty Grade’ on my bike. I was scared silent about the run. I just knew my run fitness wasn’t where I needed it to be to tackle this course. But, race day came anyway, so ready or not, here we come!

All smiles as we wait for our swim waves to go.

age groups had more than one wave. I started in the front and to the outside of the clockwise swim. I was confident that I’d be a strong swimmer, but I’m still not fast enough that I belong front and center. I took a few warmup strokes and before I knew it we were off! And the next thing I knew, I was off course and in the branches to the side of the dock. Way to go. I rallied and got into a good rhythm. After so much progress in my swim stroke, I was hoping for a huge swim PR.  The one thing that I have yet to fix in my

One of the best moments of the day. Swim PR done and now I get to ride my bike!

stroke is swimming crooked. I was all over the place, but that did allow me clean water to do my own thing. I think I swim better this way than trying to cling on to feet for the draft benefit. I hit the way out hard and about half way through, started to catch a bunch of the swimmers in the wave ahead of me. The rest of the way back was loaded with swim traffic, but I took comfort in the fact that I was swimming in the right direction as I zig-zagged back to the boat ramp. I knew I had pretty good swim strokes, but without swimming straight, I was worried I wasn’t going to get my swim PR. What was I worried about? It wasn’t my goal, but it wasn’t far off and it was definitely a huge PR. I got out of the water and up the boat ramp in 33:21. What a great way to start the day! Thanks 2XU for the best wetsuit a girl could ask for! 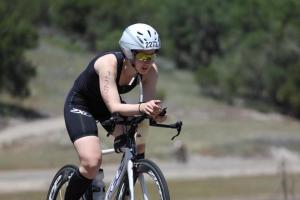 finishing up the challenging bike course

I made my way through the massive transition area and on to my bike. My plan was to ride pretty conservatively so that I had enough oomph to get up and over Nasty Grade, the long, steep climb that rears it’s ugly head at about mile 41 on the course. Talk about high-volume traffic! I was picking off the slower male cyclists one by one. I’m glad I had enjoyed the scenery while pre-driving the course because I was all business on race day. There were a few girls out there with me and we were definitely pushing each other. One brave girl blew past me with her disc wheel and I said a little prayer for her, hoping she wouldn’t get blown over in the next crosswind section. The pavement on the last half of this course is brutal. It is so hard to keep your power up when the road is just rocking you every minute. By the time I got to Nasty Grade, I was tired but ready. I made full use of my 11-28 gear setup and spinned my way past rider after rider. That wasn’t my concern. Since I’m such a weenie descender, it was the long, windy downhill I was worried about. My coach had instructed me to not look at my bike computer so I wouldn’t get freaked out by the speed I would gain. I said another little prayer and headed down the hill. I was staying calm until I saw the train of flashing lights ahead. Another rider had crashed hard. There were ambulances and paramedics and police cars and flaggers yelling at me to slow down. I was more than happy and a bit relieved to have an excuse to do so. I know that there is a rough section of pavement toward the bottom of the hill, so I wondered if that had anything to do with the crash. A bit shaken by the scene, I worked my way past and tried to get back into a rhythm. Knowing how challenging this course was, I was hoping to come in under 3 hours. I narrowly missed the mark and entered T2 after 3:00:28 of ride time.

I grabbed my fuel and number belts, slipped on my visor and headed out of T2. I was really moving and had a great first mile. But this mile was on pavement and fairly flat. As soon as I got to the trail and hills, it was a whole different story. The pain started early and came often. I would be blown away about how beautiful the course was and then I’d turn the corner and be faced with a trail that was ‘are you kidding me!’ steep. At one point, every single person on the trail ahead of me was hiking up a hill. Not jogging or running. Hiking. That is how steep it was. I did the same. Hands on knees, doing everything to drive my body up and over these horrendous uphills. And the downhills were just as bad. I was afraid of taking one false step that would have me tumbling down the dusty trail. Mid-way through the run, I was toast. The 85-degree heat was bearing down on me and I stopped to take a rock out of my shoe. An older man had caught up with me and asked me if I had any salt pills I could spare. I thought about it for a second and rationalized that my day was already imploding, what’s one less salt pill? Plus, that guy really needed it and I could at least be a little relief to another racer out there. I stopped and handed over the salt pill. He was so thankful and we both started to run again.

Not long after I gave away one of my salt sticks.

After this, I ‘ran’ the majority of the rest of the race minus the aid stations were I would beg for ice or at least cold water. The day was so hot, I never got either request. I got to say, the women out racing definitely deserve more credit than the men. The hour or so difference in swim start times meant an hour longer in the oppressive heat. At one point, the guy running next to me thought he was hallucinating as we ran past a male Cal-Poly student wearing nothing but a smile. I explicitly told the student to not touch me! That was at about mile 8. I struggled the rest of the way, but to add insult to injury, the last quarter mile is down a steep hill. You would think that it would be nice after running up all those trail hills, but it was so steep you had to use every tired muscle in your body to keep yourself upright and from falling over and rolling down the hill. My quads were shot. This was the slowest half-marathon I’ve done in a really long time at 2:12:08, but I was so happy that the race was over! Total time? A very long and painful 5:51:50 for 21st place in my AG. Not even close to a spot at the World Long Course Championships and not even a qualifying time for Long Course Nationals.

Let’s get this race done!

The intense heat and the length of time I was out in the sun was not a good combo. I am already a really pale person, but my lips were turning purple and my skin was a yucky blue white. I was escorted to the med tent where I was pumped full of fluids with an IV. It made me feel a lot better, but I am not loving this trend of visiting med tents after races.

The festival atmosphere of this race, plus the amazing scenery would bring me back to this race. I actually really want to do it again when I am fully prepared. I kind of want to stick it to that run course that so thoroughly chewed my up and spit me out. Wildflower, you are no joke and I’ll be coming back for you someday!

AND! A big congratulations to the very talented Melissa who earned her spot to the World Championships in Spain! You never cease to amaze me!

Melissa, Mike and me after the race. Congrats, Melissa!