While preparing for my first running race since New Year’s Day this week, I asked myself, ‘when do you know if you’re a runner?’

I have never considered myself a runner. Since I was little, I was usually the last finisher in any running activity—the mile in P.E, line sprints in basketball, my delusional attempts at cross country races. It just wasn’t my thing. I resigned myself to thinking that my legs were built too thick to ever be fleet of foot.

But, as I continue to train for triathlon, my running has slowly, but steadily, improved.

I just read my favorite definition of the difference between a jogger and a runner. “A race number!”

So, yesterday, I was a runner. I was so happy to get to participate in Seattle’s Seafair Triathlon as a member of a sprint relay team.

Because I’m still not cleared for swimming, and I’ve just started to ride my bike on the road again, the run was pretty much my only option. I was so happy that Alison and Lisa, my teammates, were willing to join me in the sprint relay adventure. 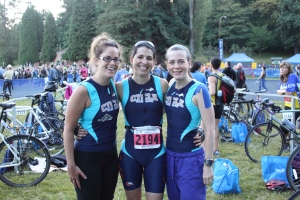 Ready to get our relay started.

It was a beautiful day for a race, the first day it has truly felt like summer this year. We had to arrive really early—5:40 am as the Olympic distance race started first and our packets said transition would close at 6 am. We ended up standing around forever and the relay swim start didn’t go until around 8 am. I got antsy, wished Alison good luck, and headed out for my warmup.

I had a strange ache in my right shin that I’m going to blame on pre-race jitters. It went away the faster I ran and started back up again when I brought the pace down. Just another motivator to run as fast as I could. A couple of miles later, I headed back to transition and made it back in time to watch Alison be the first woman relay swimmer out of the water! Our team was off to a great start! Lisa took her bike, and booked it out of T1. 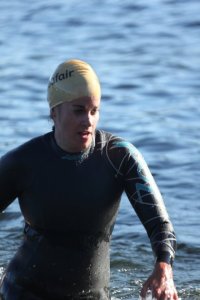 I started to get antsy again, so I started to jog in small circles around the transition area.

I didn’t have to wait very long. Lisa had an amazing bike ride on a steel-frame rig, and I can only imagine how quick she’d be on a carbon road or TT bike. She tagged my hand and I sprinted out of T2. 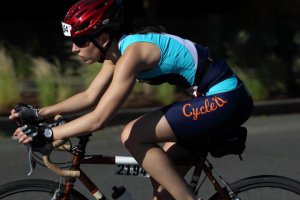 Lisa, hauling on her bike.

Like, ridiculous-what-am-I-doing sprint. I hit the start button on my watch as I went over the T2 timing mat and started my run waaay too fast. I have to laugh that my watch says I reached a 4:42/mi pace at some point. Tooo fast.

I was so excited to be passing runners at an alarming rate. I know they had all swam/biked, and some were doing the Olympic, but I fed off the energy since it was a very rare experience for me. My shin didn’t hurt at all. I felt really good until I got to THE HILL. Anyone who has done a 5K at Seward Park knows what I’m talking about. I slowed down my breathing a bit and just made sure I got up the hill without completely blowing up. I did the same on the way down, only running as fast as I thought I could without falling on my rear. 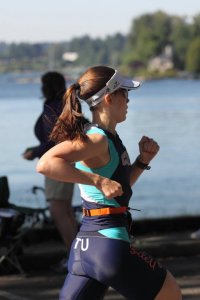 Last stretch before the finish. Gutting it out.

With a final time of 1:16:31, our relay team placed second among women-only teams and was first in our ‘under 105 years’ division. (They combine the ages of all three racers together.) In our division, each of us had the fastest splits of the day! 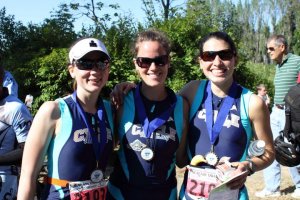 It was a beautiful sunny day and I was so blessed to get back to racing. And as always, it was great to hang out pre- and post-race with my other teammates and athlete friends. 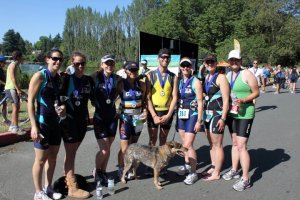