I should feel blessed, not overwhelmed, that I packed a lot of living into this past week. I should be thankful that I’m not at a loss of words for what I did this week, or what I thought about this week. I think that’s better than living a life where you say ‘nothing really happened’ week-in and week-out. But writing about it is a bit like eating an elephant. Where in the world do I begin?

Let’s start with an update on my foot fracture. I went in at 7:10 am on Tuesday for my check-up appointment with my podiatrist. He was pleased to see that the extreme swelling had subsided, but said that I was probably looking at a full 8-week recovery period due to the severity of the break. I had to laugh out loud when he told me a resident/intern (forgive me, I don’t know all the steps to becoming a doctor, other than what I’ve seen on Grey’s Anatomy) saw my scans, he got excited because he’d never seen anything like it before. My doctor told him that it was rare and only the 2nd he’d seen like it in his 20-year career. The not-quite-yet-a-full-doctor said ‘I could write about this!!’ So, yes, I may end up as a case study in some medical journal in the future.

Basically, it was a 10-minute meeting to tell me I have to wear my boot for another 3 weeks until my next check-up and I have to continue aqua jogging.

Now, yesterday was a particularly ugly day in Seattle—blustery, rainy and cold. It was the kind of day that really makes you wonder if it is really worth living here. I had a chance to chat with my mom on the phone and I described it to her as living inside a black-and-white tv. There were lasagna-like layers of grey. Dove grey sky with puffy steel-wool grey clouds swiftly gliding by. No hope for a peek of sun. You could hear the hesitation in her voice when she described the sunset she was experiencing in Southern California—blue sky, fiery orange sun that painted the clouds in a spectrum of pink.

Thankfully, I’d be on my way to Scottsdale, Arizona in the morning where the weather report is 90 degrees and sunny. Otherwise, I just may have started crying from a severe case of SAD.

Kevin’s law firm as a bi-annual retreat in Arizona. At first, he wasn’t planning on attending, thinking I’d want to bike race over the weekend. Normally, that would be true, but as the weather has been so awful, getting away sounded like my ticket to rejuvenation. (That, and all the mass-start bike races are at least a 5-hour drive away.) So, I encouraged him to go and to take me with him. We bought a plane for me on Monday and we are on a plane today. I borrowed a bike box (thanks Jess and Niels!) so that I could ride around the dessert sans knee and arm warmers while Kevin sits in business meetings.

While I do plan on lounging and relaxing a bit too, I will be able to get my swim and aqua jog workouts done in one of the hotel’s four outdoor pools. Kevin surprised me by giving me my very own aqua jogger belt. It’s lavender! I hope to get a picture of it in action this weekend. 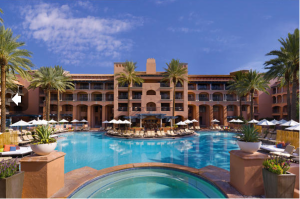 Finally, a short update on the racing season. It has been decent. I have had some great results, 2 second-place finishes and my first win of the season at the Skagit Valley Time Trial. That course must be tailor-made for me, because it was also the course used for the Bellingham Stage Race Time Trial last summer—my only other win in my bike racing career. But other than that, it has been lukewarm and I’m afraid my time is running out. I only have a handful of races left before I hang up my road helmet for Ironman Coeur d’Alene training. I still need 7 upgrade points to become a cat 3. I didn’t get any for my 11th place finish at Independence Valley Road Race. I wasn’t really expecting to get any points out there on that hilly cours, as climbing is challenging for me, but I was still a bit disappointed to walk away empty handed. I will say that IVRR was great practice for the Tour of Walla Walla, coming up in a few weeks. I lagged behind on the climbs but proved to myself that I can TT to catch back on, even if the lead pack gets a rotating paceline going. It hurts a lot, but it helps to know that I can physically do it as long as I resolve to do so. 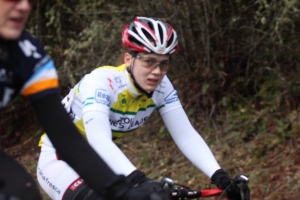 Okay, not quite done. I wish all my friends that are racing this weekend the best of luck! I have a crew of triathlete friends racing at Ironman California 70.3—Vicki, Cathleen, Lilia and  Laura—and am hoping that someone comes home with a Kona spot! I also have a crew of Cucina Fresca teammates headed down to the Cherry Blossom stage race. Go get ‘em Jess, Cathy, Alicia, Tara, Amber, Courtenay and Lisa! Lastly, I wish teammate Lori the best of luck at Frozen Flatlands in Cheney, WA … but I’m happy to be cheering from afar. In the sunshine. Wearing sunglasses.