Posted on March 8, 2011 by carlsincharge

This past weekend was start of the Washington bike racing. No snow. Actually, we lucked out with a little bit of sunshine and no rain.

On Saturday, my bike team hosted the Icebreaker Time Trial. Two years ago, I finished this race using my road bike in 29:14.70. Last year, I got to do my first time trial with a disc wheel and finished in 26:51.32. This year, my goal was to hit an average speed of 23 mph—hopefully good enough to snag a spot on the podium and put myself in contention for the cat 4 women’s series leader’s jersey.

My start time was on the late side, so I got to hear how the wind was affecting the course. Overall, it seemed that racers were posting slower times than the year before. I knew I was really going to have to work hard to achieve my goal pace.

When it was my turn to ride, my stomach was in knots. I repeated ‘it’s the first race of the year. It doesn’t matter’ over and over. But, in my head, thoughts of ‘have I trained hard enough? Am I strong enough? Am I good enough?’ kept creeping in.

My race was pretty uneventful. I pushed as hard as I could for 10 miles. I passed my 30-second man in under 4 minutes and was slightly impeded by a farm truck making a left hand turn. My legs burned when I finished and I got a lot of positive feedback from those who watched me cross the finish line. I was disappointed though because I didn’t make my pace goal. I averaged 22.9 mph. So close! But, as I heard how others had done, I got excited. I just may have pulled out a win! My official time was 26:28.00. 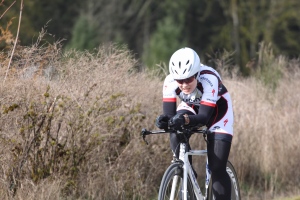 Kevin, Wrigley and I waited around a long time to find out how my time stacked up to the competition. I didn’t win. I was 2nd by less than 3.5 seconds to MaryMargaret Bowmer of Fanatik. It was a 23-second PR for me, so it was hard to stay disappointed for very long.

Now, Sunday. Sunday was the first road race out at Mason Lake. The long and short of it, I did a ton of work, only to have finished 19th. I was devastated. I finished better in my very first road race two years ago. I had a flat tire at the start line, gearing issues headed into the finish line, but it is hard for me to keep making excuses. I just want to upgrade already! I felt like I was a terrible example to new racers, but I’ve been told that everyone has days like that. I apologized to those I felt like deserved it and vowed to write it off the books. That is the beauty of starting the race season, there is always next weekend.